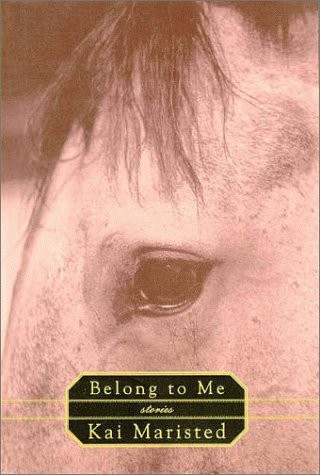 "These are spirited, unusual stories, dark with obsession and rich in character: a pleasure to read." --Andrea Barrett, author of Ship Fever and Other Stories, winner of the National Book Award

"Maristed's stories explore human will and desire in taut, unflinching realism. Her voice sparkles with racetrack know-how and idioms, but her work is always driven by an unflagging lyric vision." --Maria Flook, author of My Sister Life

"...if winning a reader's complicity is a writer's biggest obstacle, Maristed clears it with style."

"The common presence of horses (blue-dappled and porcelain, randy, imaginary and fleet) links the nine stories in this haunting, sad, indelible collection. In the eerie "Blue Horse," a kidnapped girl speaks with disarming simplicity of her imprisonment in a man's rank, food-stained apartment, and of her truck-stop prostitution, her alienation from her pious family and the love, disgust and terror she comes to feel for her captor.... Finally, the success of these impeccable stories rests on the connection between humans and horses, on sympathy between species that speaks of what is brutish and gentle in all of us."

"Kai Maristed's Belong To Me has the true barn-reek of sweat and leather, hay and manure. Set in and around racetracks and the show-jump circuit, in knackers' vans and on struggling farms, these horse-haunted tales take as their epigraph some lines from Edwin Muir: "In the first moment we had never a thought / That they were creatures to be owned and used." As possessions, horses are the supreme token of money and class. For most people, they are mere "aesthetic symbols," as one character notes: "What bugs me is there's no purpose, no end, it's simply this inarticulate class ritual that just goes on and on--look at the getup you have to wear, like a pantomime. And what it all costs, what you could do with that money--it's so egocentric!

"And yet, like the horses in Muir's poem, Maristed's animals are also fundamentally strange, charged with inchoate longing, like figures from one of our least interpretable dreams. In several of these stories, horses figure only as the vocabulary with which characters discuss what they can't quite put into words. And then there is "The Blue Horse," a harrowing tale of abduction and abuse that makes The Collector look like a children's story. The blue ungulate makes only the briefest of appearances, but he manages nonetheless to embody all the narrator's longings for freedom and affection.
If all this equine symbolism sounds heavy-handed, it's not; Maristed's characters are too thoroughly imagined for that. What's more, she has a rare knack for quickening a reader's pulse, as when a kidnapper stalks his victim or a rider jumps his way through a particularly difficult combination. Terse, unsentimental, frequently disturbing, these are fictions not just about horses but about obsessions and the dark places they breed."

These nine short stories share the leitmotif of horses, but each takes a stark and unique jump into a different world where humans fail as domesticated animals. Maristed has enjoyed the publication of two novels, Fall (LJ 5/1/96) and Out After Dark (LJ 9/1/93), but this collection demonstrates her authority as a creative writer. Here she brings to her characters and settings a clarity and palpableness that are astonishing given the diversity of tales she has to tell: a kidnapped and ravaged teenaged girl recounts her years of abuse; a teenaged boy pokes at his discomfort with the horse dentist like a guy continually prodding his own sore tooth; a polo star falls into domestic anonymity with his would-be assassin; a man is fired from his father's law firm and turns to building a corral instead of telling his wife. These tales serve to supply sophisticated readers with the kind of brief fiction that seems both more powerful and more graceful than mere human effort could supply. Recommended for public library collections and to creative writing students in search of breathtaking models of the craft.